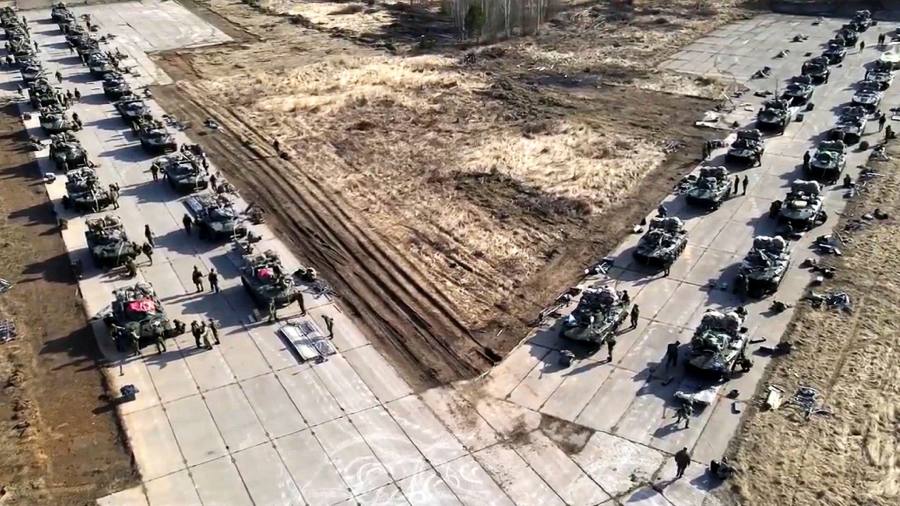 Russia’s defence minister has ordered tens of thousands of troops recently deployed close to the border with Ukraine to return to their bases in a move likely to ease immediate fears of a conflict and tensions with the west.

Moscow had moved as many as 100,000 troops, alongside tanks, military aircraft and naval ships, to its border with Ukraine over recent weeks, according to Kyiv, sparking fears of a potential invasion and prompting condemnation from the US and the Nato military alliance. Russia said the troops were conducting exercises and were no threat to anyone.

Sergei Shoigu, Russia’s defence minister, said on Thursday that the exercises had been completed and that the troops should start to leave the region from Friday. All troops would be back in their original bases by May 1, he added.

Russia’s rouble, which is sensitive to any threat of western sanctions, jumped as much as 1.4 per cent against the dollar on the news.

The possibility of war between Russia and Ukraine has put more pressure on strained relations between the Kremlin and western powers due to new US sanctions on Moscow, a string of tit-for-tat diplomatic expulsions and international anger at the poor health of jailed opposition activist Alexei Navalny.

“I believe that the objectives of the surprise check have been fully achieved,” Shoigu said in a statement. “The troops have demonstrated the ability to provide a reliable defence of the country. In this regard, I made a decision to complete [the exercises].”

While the call for a withdrawal looks set to alleviate short-term fears of a conflict, the region will remain a potential flashpoint, with Russia and Nato likely to continue to accuse each other of stoking tensions with the deployment of military personnel.

Shoigu on Thursday said all Russian troops should remain “in a state of readiness for an immediate response in case of the unfavourable development” of Nato’s annual Defender Europe exercises, which are taking place in eastern European countries until June.

The withdrawal announcement comes a day after President Vladimir Putin used his annual national address to lawmakers to warn western countries to expect a “quick and tough” response if they cross any of Russia’s “red lines”.

Russia annexed the Ukrainian peninsula of Crimea in 2014, in a move that precipitated a war between pro-Russian separatists and the Ukrainian army for control of the Donbass, the eastern part of Ukraine bordering Russia.

Russia’s unexpected decision to conduct the recent military drills came amid a sharp rise in ceasefire breaches in Donbass, adding to the more than 14,000 people killed there since the conflict began.

The exercises led Ukrainian officials and a number of western capitals to warn that Russia may have been considering a military operation inside Ukrainian territory, and prompted demands from the US, Nato and EU states for Russia to withdraw the troops.

13 Tips For Real Estate Investors Crafting An Exit Strategy
US opens debate over cyber ransom payments after pipeline hack
How To Determine Your Investment Strategy For Apartment Buildings
Israel steps up battle against communal violence and Gaza rocket attacks
Cathie Wood’s ARK Innovation ETF falls to new low for the year, off nearly 35% from recent high