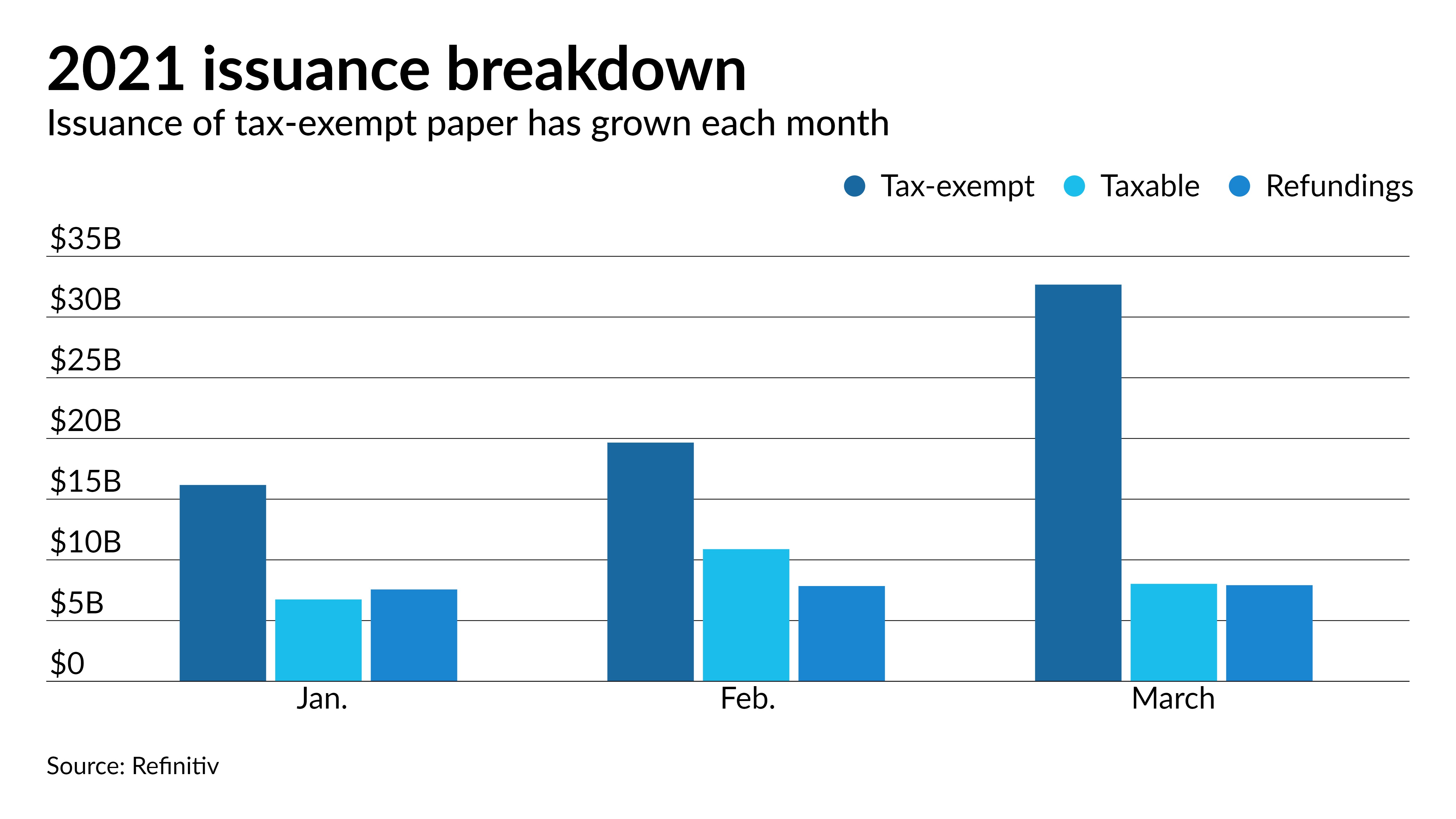 Municipal issuance grew in March year-over-year with new-money volume climbing at a higher clip than refundings as rates have risen and issuers pulled back on refunding their debt.

The market closed out the first quarter of 2021 with $41.6 billion in March after a total of $56.9 billion of long-term municipal bonds issued in the first two months of the year, according to data from Refinitiv.

Volume for the quarter is up 7.1% compared to Q1 of 2020 and monthly volume is up 105.3% from March 2020’s total of $20.3 billion, after volume last year plummeted as the onslaught of the COVID-19 pandemic essentially shut down the primary.

While taxable volume has grown to 30% of total issuance over the past two and a half years,, Brian Musielak, senior portfolio manager for Commerce Trust Co, thinks it will fade as rising yields will limit refunding opportunities, along with the likelihood of higher taxes that will make tax-exempt debt “more appealing from a cost standpoint for issuers.”

“There is also a bipartisan legislative proposal introduced by the House Municipal Finance Caucus to reinstate issuers ability to advance refund their outstanding debt obligations with tax-exempt debt,” he said.

“We are right in the middle of an exciting and changing environment, with the personal and corporate tax rates set to change, will learn more over the next 30 days, but more good is on the horizon for the asset class,” Heckman said.

“It will be interesting to see if they bring back advance refundings, but also I think another reason for the fewer taxable advance refunding deals at this stage, is that there is not much refunding left to do, as a lot of the debt has already been refinanced or was issued at attractive terms,” he said.

“No real surprises for us in terms of the level and composition of new-issue supply,” Musielak said. “Increased volumes this year in revenue sectors such as hospitals and higher education are driven by tighter credit spreads, which have significantly reduced relative borrowing costs especially for the lower-rated issuers.”

He expects overall volume to be “very strong” this year “driven almost exclusively by new-money issuance,” he said, noting that any sizable federal infrastructure bill will certainly be impactful and could drive supply even higher if traditional state matching funds are required.

Heckman said that in his eyes, there is “not enough” tax-exempt issuance and “more than enough” taxable issuance.

“On the taxable side there is enough supply, and quite frankly, a pull back on taxables bonds would help the tone of the market,” he said. “On the exempt-side, we are trending below last year’s weekly average of $6.1 billion, as [heading into this week] the 2021 weekly average is $5.3 billion.”

Kim Olsan, senior vice president, FHN Financial noted that looking back through February, the breakdown between new-money and refunding issues “is telling.”

“Bond Buyer data show issuance for new purposes was off just 4% from 2020, but refundings dropped 43%, as issuers are finding more budget flexibility with greater revenue receipts, potentially prodding supply for delayed projects,” she said. “Still-favorable rates are an added incentive—over the last five years AA issuers could have come to market with long-term debt averaging 2.69%, about 75 basis points above current levels. Future plans from the Biden administration regarding infrastructure would add to new-money volume, and also potentially raise the cap on Bank Qualified limits and restore advance refundings.”

Private placements plummeted 91.7% in March to $245 million in 20 issues from $2.971 billion in 114 issues last year, partly due to the market shutdown as issuers went straight to the banks for liquidity.

Only one sector was in the red year-over-year for the month, while the rest increased by at least 30.2%.

California was the largest state issuer through the first quarter of 2021. All issuers in the Golden State have totaled $20.04 billion. New York is second with $13.81 billion, Texas is third with $9.69 billion, Illinois followed in fourth with $3.84 billion and Maryland rounds out the top five with $3.53 billion.

There has been and continues to be a lack of big state general obligation deals and there are currently no big sales slated until the end of April.

“While there are some seasonal patterns which tend to push larger state GO issues into late first quarter and early second quarter, we do think that the uncertainty surrounding federal stimulus has delayed some issues as well,” Musielak said.

Heckman added that tax revenues for a lot of states have been much better than anticipated, so he is “not surprised” by the lack of GOs from a state level.

“Last year states were able to issue debt at favorable rates and discounts and now property tax and current resident real estate markets are creating greater revenues for the states, so the need for state governments to issue debt as much as people thought,” Heckman said. “Also playing a factor, is that states know that $350 billion of handouts are coming to all states, so why incur more debt when they can wait for money to be handed to them.”

The biggest story of the year, according to Musielak, is the “massive” inflow into muni funds and ETFs.

“According to Refinitiv Lipper data, muni funds and muni ETFs pulled in over $26 billion year-to-date through March 24, as the demand from these products has overwhelmed the market of available bonds for purchase creating at times a frenzy of buying,” he said. “This does pose a liquidity risk if say yields were to spike which could lead to a sizable reversal in these flows.”

Heckman added that while there have been some changes with flows, “cracks in the armor” as he called it, with outflows only once in the past month and lessening flows in the most recent weeks, flows “aren’t gonna see a big seachange in one direction or another going forward.”