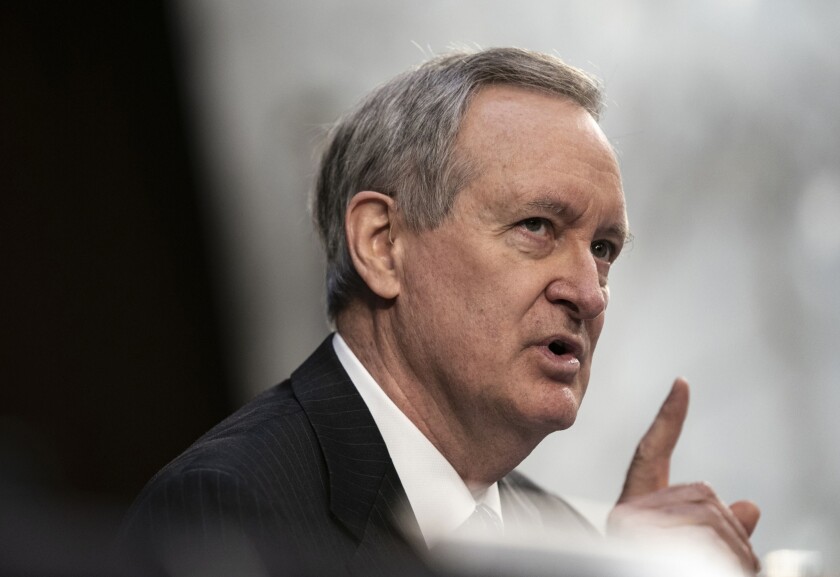 The public finance sector will find an attentive audience from a new chairman of the Senate Finance Committee next year if Republicans retain majority control of the upper chamber.

Sen. Mike Crapo of Idaho, who is expected to become chairman under a Republican Senate, has been receptive to increasing the limit on bank qualified debt.

Crapo and Sen. Charles Grassley of Iowa served as Republican cosponsors of the bipartisan Municipal Bond Market Support Act of 2011 (S.1016). That bill would have increased to $30 million from the current $10 million, the limit on small borrowers to use bank-qualified bonds.

His organization represents includes smaller nonprofit hospitals and colleges that would benefit from proposed legislation, which in the current Congress, has no Senate Republican sponsors. It does have bipartisan sponsors in the House and was folded into the much larger House-passed Moving America Forward Act, a wide-ranging infrastructure bill that has been blocked by the Senate.

President-elect Joe Biden is expected to make passage of infrastructure legislation a top priority after he takes office and he has said he will work to bridge the differences between congressional Republicans and Democrats.

“Sen. Crapo has direct and intimate knowledge of the situation in Idaho and understands how small, local hospitals, as well as other borrowers, could benefit from the liberalization of the bank-qualified rules,” Samuels said. “If he becomes Finance Committee chairman we would look forward to working with him on small borrowers and other municipal bond issues.”

Idaho has a “very strong” state financing agency that would benefit from the legislation in working with small issuers, said Emily Brock, director of the federal liaison center of the Government Finance Officers Association.

Crapo is expected to relinquish his role as chairman of the Senate Banking Committee in order to take the helm of the Senate Finance Committee while Sen. Charles Grassley of Iowa moves over to the Judiciary Committee to become the top Republican there.

“He’s got strong views, but he’s always going to reach out,” Democratic Sen. Mark Warner of Virginia recently told Roll Call. “In everything I’ve done with him, he is a tough negotiator, but when he gets to ‘yes’ you can count on it.”

Notably, Crapo worked with Democrats on the Dodd-Frank Wall Street Reform and Consumer Protection Act of 2010 which enacted stronger oversight of municipal securities.

Dodd-Frank required the registration of municipal advisors with the Securities and Exchange Commission and touched of a slew of rules issued by the Municipal Securities Rulemaking Board.

The 2010 law also required the MSRB to adopt professional standards for municipal advisors and created an independent Office of Municipal Securities at the SEC.

Brett Bolton, vice president of the Bond Dealers of America, said Crapo has worked with the Democratic Sen. Sherrod Brown of Ohio on bank reform and other bipartisan legislation.

BDA will be happy whether the Senate Finance Committee is chaired by Crapo under a Republican majority or by Sen. Ron Wyden of Oregon under a Democratic majority, said Bolton.

“I think the public finance sector will be well treated under both chairmanships,” Bolton said.

Wyden is currently ranking Democrat on the Finance Committee and would become chairman if Democrats win two runoff races in Georgia on Jan. 5. If Republicans win even one of those races, they would keep their majority.

Wyden has a record of supporting the creation of direct-pay bonds before Build America Bonds became law in the 2009 American Recovery and Reinvestment Act. He’s also been a supporter of tax credit bonds.

In a pre-election analysis, BDA described Wyden as an advocate of “principled bipartisanship” who works to find solutions that allow all parties to stay true to their respective principles while taking the best ideas from all sides.